CHVRCHES are just a few weeks away from the one year anniversary of their excellent fourth album Screen Violence, but it seems they’ve been keen on celebrating it ever since it came out; since the fall of 2021, CHVRCHES have been on tour very consistently, jumping back and forth between North America and Europe multiple times for extensive runs, festival dates, and more. Many musicians are jumping at the chance to bring their pandemic-crafted albums on tour, and CHVRCHES have done so defiantly.

So, witnessing their performance at the Brooklyn Mirage in New York City on Wednesday (August 3rd) was not just an opportunity to see several Screen Violence cuts live, it was a chance to see CHVRCHES completely in their element, their show fine-tuned and riveting. More so than any of the band’s previous tours, there’s an air of theatricality and a deep consideration of the band’s extensive catalog, and it makes for a terrific experience.

It won’t last forever, though: After their Brooklyn show, CHVRCHES are finishing up their run of East Coast dates before heading to the West in early September. In addition to shows in Denver, Seattle, San Francisco, and pretty much every other major city west of the Rockies, CHVRCHES also has a special show coming up at The Hollywood Bowl with art pop legend Grace Jones on September 25th. (Get tickets to their remaining upcoming dates here.)

But after the Scottish trio’s final gig in Boise, Idaho on October 3rd, the band has no more upcoming tour dates besides a few Australia/New Zealand gigs around New Years. So, if you’re on the fence about seeing your first — or fifth — CHVRCHES show in the next two months, here are five reasons why we recommend it.

Lead singer Lauren Mayberry really pushes herself vocally on Screen Violence, and on tour, it’s the best she’s ever sounded. The soaring highs in “Violent Delights,” the restless energy on “Final Girl,” and the rise-and-fall dynamics of “Asking for a Friend” are all great examples of how dynamic she is as a vocalist, and how the new material is letting her shine in a bold and exciting way.

The setlist is certainly heavy on Screen Violence cuts — after all, bands rightfully want to play and celebrate their new material first and foremost. Some of the organic and live elements to the new songs highlight where CHVRCHES is heading as a band; there’s a real tension between their usual synth-based concoctions and the cinematic, gritty palate that many of Screen Violence‘s songs champion. Which leads us to our second reason: 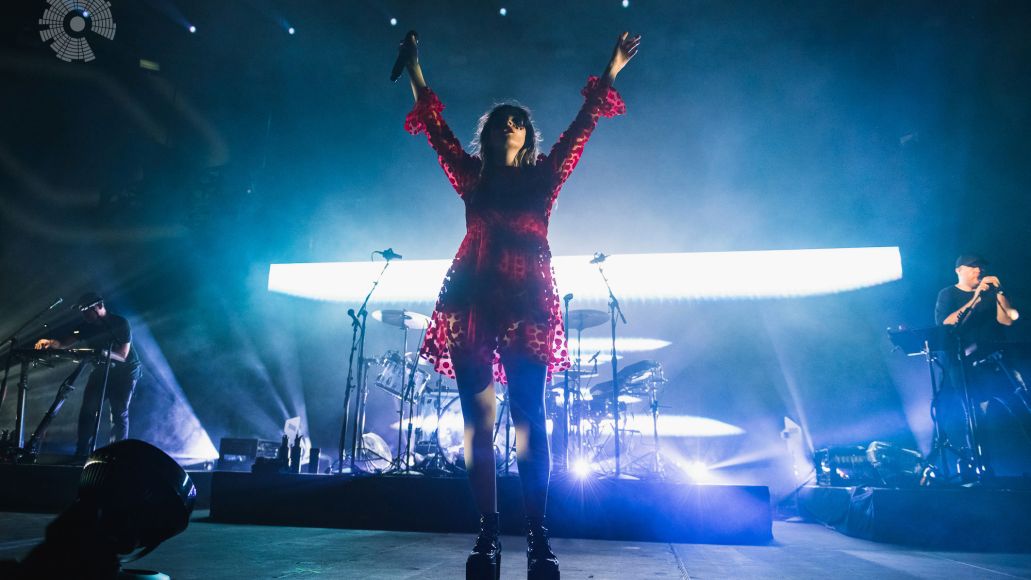 CHVRCHES have never avoided dark themes in their music, but Screen Violence seems to embrace that darkness head on. Their show on Wednesday night was undoubtedly a celebration (with multiple dance parties, of course), but several songs depict agitation, hopelessness, grief, and death with powerful language and cathartic sonics. Screen Violence tracks “How Not to Drown” and “Violent Delights” in particular are, frankly, gnarly to witness live — and the band’s high levels of volume and distortion make these tracks feel larger than life.

But CHVRCHES want you to know that it’s not all gloom and doom: There’s a light at the end of the tunnel, a smile on each member of the band throughout, and a sense of hope and unity that doesn’t need to be said out loud in order to be acknowledged. This is perhaps best represented by “Asking for a Friend,” which appears at the beginning of their encore; with each passing phrase that contemplates death, regrets, and anguish, Mayberry becomes more animated, growing with confidence and power as the song threatens to explode. And when it finally does, the wash of euphoria is a true relief.

These last few years have been, well, insane, and CHVRCHES have found a creative way to take their personal frustrations and present them as valid, universal fears. There are moments in time where we may look for a distraction from that which brings us collective anxiety, but CHVRCHES are here to tell us that we don’t have to be distracted from the truth to be liberated. In fact, they can be one and the same.

What’s a Show Without a Little Flair? 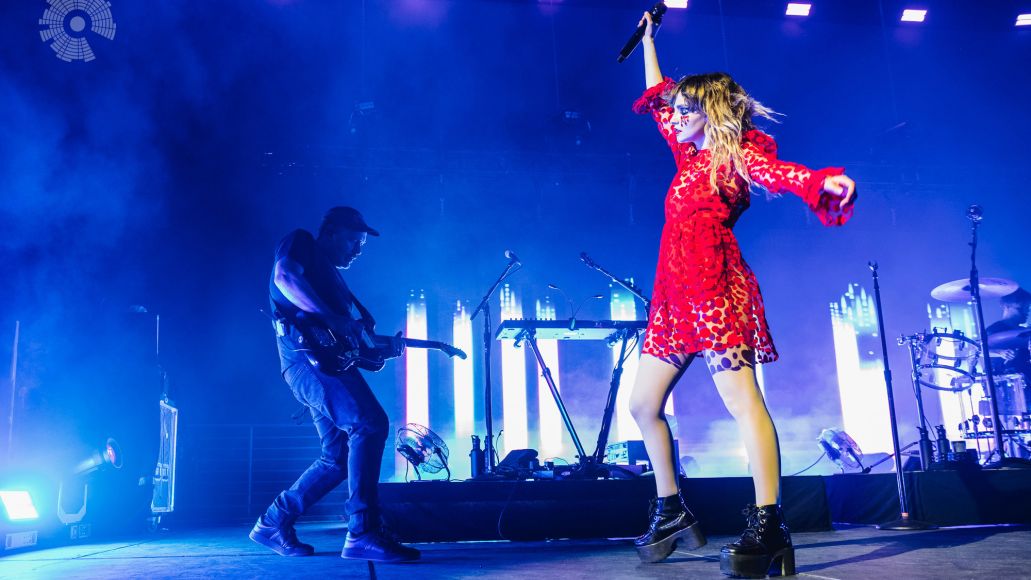 If you haven’t seen by now, Lauren Mayberry is cashing in her pop star chips on this tour. Perhaps the most striking visual moment of the entire show comes at the start of the encore, where Mayberry arrives onstage with both of her arms absolutely drenched in blood, eventually painting parts of her face and torso with it in the heat of the performance. It’s an homage to the horror iconography that the band has employed Screen Violenceand it’s a really shocking, goth move to end the show with.

Mayberry also executes a few different quick costume changes during the show, with each stylish look catered to the ebb and flow of their setlist. Her dark, all-black outfit for “Violent Delights” and “Science/Visions” was an appropriate vibe switch, and her custom “Final Girl” T-shirt — a regular now in CHVRCHES sets — was perfect.

Give It Up for the Band 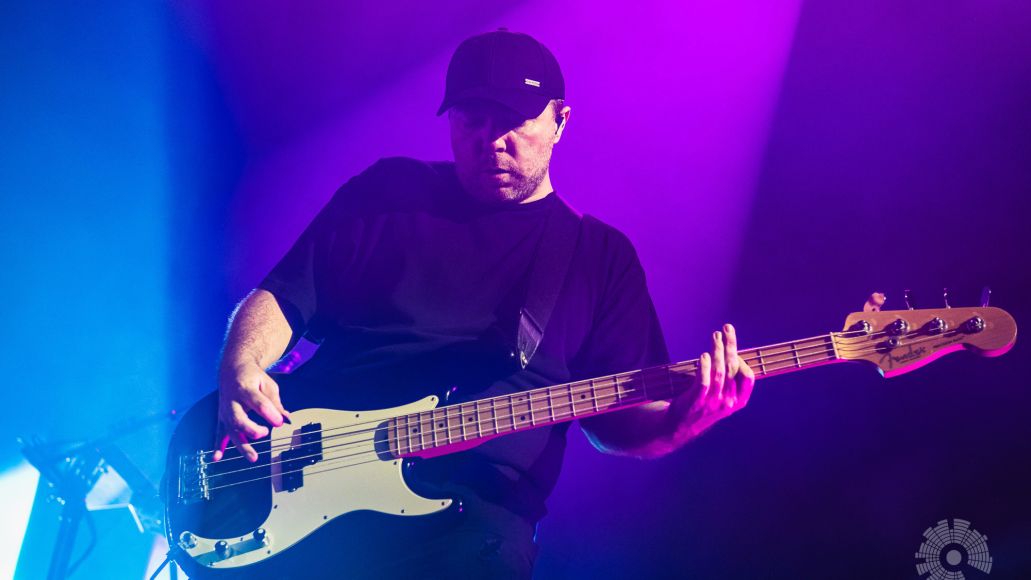 Mayberry’s star power is so undeniable that it can be easy to lose track of the incredibly talented musicians working with her. Synth scientists Iain Cook and Martin Doherty are outstanding performers and producers, and drummer Jonny Scott is a joy to watch. When Scott was added to the CHVRCHES touring lineup for their 2018 LP, Love Is Dead, there was a brand new live element to the shows that created a more active and fluid dynamic within the band. But Screen Violence‘s emphasis on distorted guitars, seismic bass lines, and expansive drums requires more than just having Doherty and Cook stuck behind their keyboards. The resulting show is a treat to watch, especially considering the overall evolution and development of CHVRCHES’ live shows. 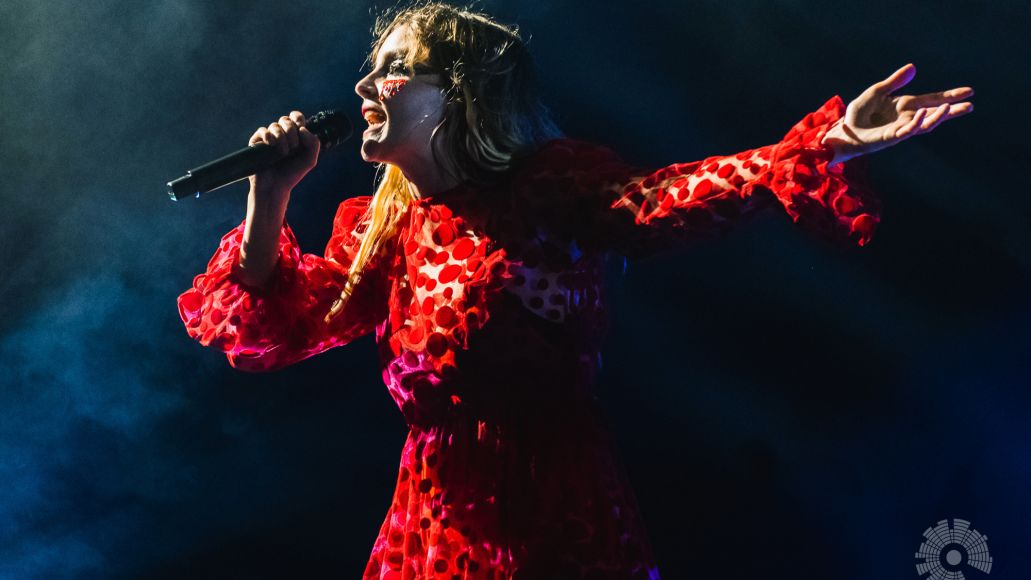 Mayberry has often referred to older hits like “The Mother We Share,” “Recover,” and “Leave a Trace” as songs that are “important to the CHVRCHES lore.” She’s correct, but it’s a fascinating concept to examine. In this so-called CHVRCHES universe, what is the thread between a song like “Recover” and a song like “Good Girls,” if there is one? If anything, highlighting these important older songs as pillars to a shared universe of music just shows how much they’ve grown as a band since 2013.

In this writer’s opinion, there are a lot more interesting tracks to represent from the band’s debut, The Bones of What You Believe, than “Science/Visions” and “Night Sky.” But these songs have been frequently included in CHVRCHES sets for each album cycle, so it’s clear that Cook, Doherty, and Mayberry share a very specific bond with them. Regardless, the older tracks are wonderful beacons to a different time, and the band pulls them off with energy and spirit.

Overall, CHVRCHES’ live show is better than ever, and when considering the context of the band’s trajectory, it’s completely unknown what they will do next. Screen Violence feels like both the end of an era and the beginning of a new one; there’s an abandoning of rules that CHVRCHES resisted breaking before, but also a culmination of many of the themes they’ve been after since the beginning. No matter what their next move is, this tour is a fitting representation of CHVRCHES using their strengths wisely, and is absolutely a high point in their already storied career.

Scroll down for a full gallery from CHVRCHES’ Brooklyn Mirage show, and purchase tickets to their remaining 2022 tour dates here.